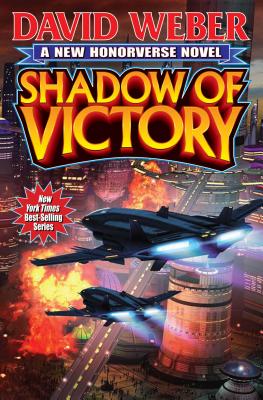 By David Weber
Email or call for price
Hard to Find

The Mesan Alignment is revealed, and, for Honor Harrington and the Manticoran Star Kingdom, this means war Unintended Consequences Sometimes things don't work out exactly as planned. The Mesan Alignment has a plan--one it's been working on for centuries. A plan to remake the galaxy and genetically improve the human race--its way. Until recently, things have gone pretty much as scheduled, but then the Alignment hit a minor bump in the road called the Star Empire of Manticore. So the Alignment engineered a war between the Solarian League, the biggest and most formidable interstellar power in human history. To help push things along, the Alignment launched a devastating sneak attack which destroyed the Royal Manticoran Navy's industrial infrastructure. And in order to undercut Manticore's galaxy-wide reputation as a star nation of its word, it launched Operation Janus--a false-flag covert operation to encourage rebellions it knows will fail by promising Manticoran support. The twin purposes are to harden Solarian determination to destroy the Star Empire once and for all, and to devastate the Star Empire's reputation with the rest of the galaxy. But even the best laid plans can have unintended consequences, and one of those consequences in this case may just be a new dawn of freedom for oppressed star nations everywhere. About Shadow of Freedom "This entry is just as exciting as Weber's initial offering . . . The result is a fast-paced and action-packed story that follows our characters] as they move from reaction to command of the situation. Weber builds Shadow of Freedom to an exciting and unexpected climax."--Daily News of Galveston About Mission of Honor, #13 in the Honor Harrington series: "Weber combines realistic, engaging characters with intelligent technological projection and a deep understanding of military bureaucracy in this long-awaited Honor Harrington novel . . . Fans of this venerable space opera will rejoice to see Honor back in action."--Publishers Weekly "This latest Honor Harrington novel brings the saga to another crucial turning point . . . Readers may feel confident that they will be Honored many more times and enjoy it every time."--Booklist About David Weber and the Honor Harrington series: ." . . everything you could want in a heroine . . . Excellent . . . plenty of action."--Science Fiction Age "Brilliant Brilliant Brilliant "--Anne McCaffrey "Compelling combat combined with engaging characters for a great space opera adventure."--Locus

With over eight million copies of his books in print and twenty-nine titles on the New York Times bestseller list, David Weber is the science fiction publishing phenomenon of the new millennium. In the hugely popular Honor Harrington series, the spirit of C.S. Forester's Horatio Hornblower and Patrick O'Brian's Master and Commander lives on--into the galactic future. Books in the Honor Harrington and Honorverse series have appeared on twenty-one bestseller lists, including those of The Wall Street Journal, The New York Times, and USA Today. While Weber is best known for his spirited, modern-minded space operas, he is also the creator of the Norfressa/Bahzell fantasy series and the Multiverse saga, a science fiction and fantasy hybrid. Weber is has also engaged in a steady stream of best-selling collaborations including his Starfire Series with Steve White, which produced the New York Times bestseller The Shiva Option among others. Weber's collaboration with alternate history master Eric Flint led to the best-selling 1634: The Baltic War. His Honorverse collaborations with Flint in the Crown of Slave Honorverse series are also popular, and its latest entry Cauldron of Ghosts is a New York Times bestseller. His planetary adventure novels with military science fiction ace and multiple national best-selling author John Ringo includes March to the Stars and We Few. With Timothy Zahn and Thomas Pope, he's the author of the Honorverse prequel Manticore Ascendant series. Finally, Weber's teaming with Linda Evans and Joelle Presby produced the Multiverse series, including latest entry The Road to Hell. David Weber makes his home in South Carolina with his wife and children.