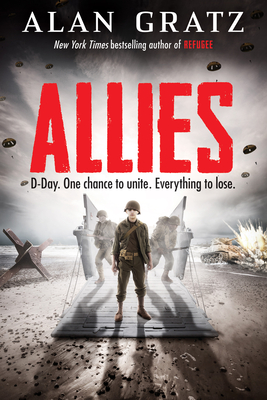 Alan Gratz, bestselling author of Refugee, weaves a stunning array of voices and stories into an epic tale of teamwork in the face of tyranny -- and how just one day can change the world.
June 6, 1944: The Nazis are terrorizing Europe, on their evil quest to conquer the world. The only way to stop them? The biggest, most top-secret operation ever, with the Allied nations coming together to storm German-occupied France.

Dee, a young U.S. soldier, is on a boat racing toward the French coast. And Dee -- along with his brothers-in-arms -- is terrified. He feels the weight of World War II on his shoulders.

But Dee is not alone. Behind enemy lines in France, a girl named Samira works as a spy, trying to sabotage the German army. Meanwhile, paratrooper James leaps from his plane to join a daring midnight raid. And in the thick of battle, Henry, a medic, searches for lives to save.

In a breathtaking race against time, they all must fight to complete their high-stakes missions. But with betrayals and deadly risks at every turn, can the Allies do what it takes to win?

Alan Gratz is the New York Times bestselling author of several highly acclaimed books for young readers, including Allies, Grenade,Refugee, Projekt 1065, Prisoner B-3087, and Code of Honor. Alan lives in North Carolina with his wife and daughter. Look for him online at alangratz.com.

* "Told by both young men, the story is gripping from start to finish as each encounters ambushes, engages in battles and experiences their devastating aftermath, and mourns the plight of innocent civilians caught in the middle. Impossible to put down, the story unapologetically demonstrates how war affects people emotionally and physically. . . . Action fans will have this flying off the shelves." -- Booklist, starred review

"The plot is suspenseful and the characters sympathetic." -- Horn Book

"Intense and fast-paced, this is a compelling, dark, yet ultimately heartening wartime story." -- Kirkus Reviews

"Gratz (Refugee) depicts the events and fallout of WWII's 'Love Day' while exploring the emotional and cultural damages of war." -- Publishers Weekly

"The book illustrates the horrors of war and the narrators' dual realization that the enemy is a person, too. This is a sad and compelling story that sheds some light on a battle that is rarely mentioned in books written for juvenile readers. . . . Highly Recommended." -- School Library Connection

An Amazon Best Book of the Year

A Publishers Weekly Best Book of the Year

A Kirkus Best Book of the Year

"A gripping, visceral, and hold-your-breath intense story." -- John Green, #1 New York Times bestselling author of The Fault in Our Stars

* "Gratz accomplishes a feat that is nothing short of brilliant, offering a skillfully wrought narrative laced with global and intergenerational reverberations that signal hope for the future... Poignant, respectful, and historically accurate while pulsating with emotional turmoil, adventure, and suspense." -- Kirkus Reviews, starred review

* "[A] hard-hitting novel... Filled with both tragic loss and ample evidence of resilience, these memorable and tightly plotted stories contextualize and give voice to current refugee crises, underscoring that these journeys are born out of a desperate need for security and safety." -- Publishers Weekly, starred review

"Gratz, who is known for well-written and well-researched historical fiction, doesn't disappoint. His latest is timely and moving... This compelling novel will help young people make sense of today's refugee crisis. Meant to be read, discussed, and shared widely." -- School Library Journal

"This heart-stopping novel is not only compelling -- it is necessary." -- Judy Blundell, National Book Award-winning author of What I Saw and How I Lied

"Full of struggle, heroism, and non-stop adventure, Refugee is not only an important book, it's a terrific story." -- Kimberly Brubaker Bradley, author of the New York Times bestseller and Newbery Honor Book The War That Saved My Life

"Powerful and compelling. Refugee is a story about what unites us all." -- Christina Diaz Gonzalez, award-winning author of Moving Target

* "While the book is replete with fascinating historical insight, Gratz has also crafted a suspenseful mystery that will keep readers on the edge of their seats. With short, action-packed chapters, it is a great choice for reluctant readers as well... A winning combination of action, suspense, and historical setting." -- School Library Journal, starred review


Praise for Code of Honor:

"Readers will be swept up by both the intrigue and the rapid pacing... Kamran is a smart and sympathetic narrator, and readers will be happy to spend time with him in this action-packed thriller." -- Kirkus Reviews

"Exciting, at times ripped from the headlines, and scary, this cinematic work has layers of intrigue and danger in each scene... will appeal to a variety of readers and will raise questions about patriotism, loyalty, and trust... A winner." -- School Library Journal

"Vivid characters and timely topics, such as posttraumatic stress disorder, contribute to making Code of Honor a first-rate novel." -- Voice of Youth Advocates

"A bone-chilling tale not to be ignored." -- Kirkus Reviews

"Gratz ably conveys... fatalism, yearning, and determination in the face of the unimaginable." -- Publishers Weekly

"Heartbreaking, gripping, raw, and emotional... storytelling at its finest." -- Voice of Youth Advocates