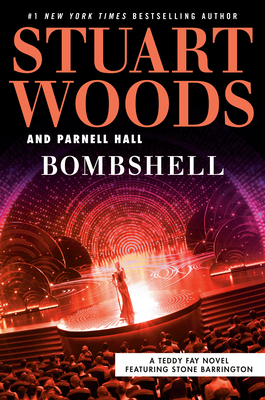 Teddy Fay is back in Hollywood and caught in two tricky situations. First, a rising star at Centurion becomes the target of malicious gossip, and Teddy must find and neutralize the source before the situation gets out of hand--or becomes violent. At the same time, Teddy finds himself targeted by a criminal thug bearing a grudge.

It's a lot of knives to juggle, even for a former-CIA-operative-turned-movie-producer accustomed to hazardous working conditions. This time Teddy will need to leverage every bit of his undercover skills and fearless daring to stay one step ahead of his foes . . . or he'll find himself one foot in the grave.

Stuart Woods is the author of more than eighty novels. He is a native of Georgia and began his writing career in the advertising industry. Chiefs, his debut in 1981, won the Edgar Award. An avid sailor and pilot, Woods lives in Florida, Maine, and New Mexico. Parnell Hall has been an actor, screenwriter, and singer/songwriter. He is a former president of the Private Eye Writers of America and a member of Sisters in Crime. He has been a finalist for an Edgar, two Lefty, and three Shamus Awards. Hall lives in New York City.

“The perfect bonbon to pick up for distraction during those long production numbers at the actual Oscars.”—Kirkus Reviews

"Woods and Parnell mix crime with Hollywood glitz for a winning combination. Nonstop action and brisk prose, plus the senior Barrington in a cameo role, make for amiable summer reading.—Booklist